P is for Prostate

The prostate, and its associated problems, is one thing that connects dogs and their male owners. A recent lecture at the NYS Veterinary Conference at Cornell University addressed prostate conditions in dogs. 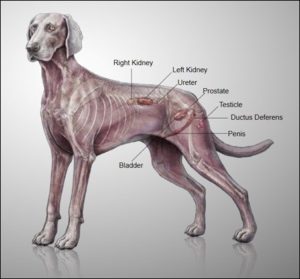 Dr. Bruce Christensen DVM MS from the University of California at Davis started out by saying that 80% of intact male dogs over five years of age and 95% of all intact male dogs over nine years of age have some benign prostatic hyperplasia (BPH). We all love the word “benign” but this BPH can lead to prostatic abscesses, cysts, infections and even constipation and/or problems with urination.

Cancer can also occur in the prostate but that is more common in neutered dogs. Yes, you read that right too – more common in “neutered” dogs. Not a common cancer to begin with, but one that intact dogs are less likely to develop.

The prostate is a bilobed organ only found in male dogs. The urethra runs through it which can lead to problems with urination if the gland puts pressure on it.

When semen is collected on a male dog, there are three “fractions” or separate fluids. The first fluid collected should be clear. This is from the prostate and has some antibacterial action. The second fraction should be milky white – that is the sperm, coming from the testicles. The third and largest fraction is again from the prostate and helps to propel the sperm along their way. This fluid should also be clear.

The prostate depends heavily on the modification of testosterone from the testicles for its health and growth. Testosterone is converted by the enzyme 5 alpha reductase to 5 alpha dihydrotestosterone. This becomes important when looking at treatment for prostate problems.

While BPH is very common in male dogs, it is important to note that most intact dogs go through life with no clinical problems. Others show constipation, problems with urination and may pass some blood in the urine or with sperm if collected. BPH can be diagnosed via a rectal exam (the large prostate is easily palpated and is uniformly large and smooth). An ultrasound can confirm simple BPH. Collecting the dog can also rule out infections.

In older males and dogs not being or going to be used at stud, castration is the simplest solution. Within 12 weeks, the prostate has shrunk down remarkably and your dog is “good to go” in every sense. This works because the testosterone from the testicles is very effectively removed.

For dogs that are still being used at stud or for whom castration is not an option for other reasons, there are medical options. Finasteride is a human product which works well for many dogs. This medication works by inhibiting the 5 alpha reductase enzyme. With a drop in 5 alpha dihdrotestosterone, the prostate will shrink. With this medication, the actual testosterone level is not affected, so a male dog will still produce sperm and have his normal libido. Prostatic fluids are somewhat reduced but so far that has not been shown to influence fertility. The drop in prostate size takes a bit longer with finasteride versus castration (16 to 20 weeks versus 12 weeks) but it is an effective and safe treatment.

Tamoxifen and anastrazole are drugs which have been used for breast cancer therapy in women. These have shown some effectiveness for use in treating BPH in dogs but have not had the widespread use of finasteride at this time. There are also some different medications used in Europe but not licensed in the United States.

Prostatitis is an infection of the prostate – almost always secondary to BPH and possibly prostatic cyst development. This is usually an “ascending” infection meaning that bacteria traveled up the urethra. E coli is a common pathogen.

Dogs with acute prostatitis will be sick and painful. They may walk with a funny gait, have a painful abdomen, have a fever and may show trouble urinating or defecating. If the infection progresses to a chronic state, fertility may be affected.

Diagnosing a prostatic infection generally involves collecting a sample of prostatic fluid for evaluation. It may be discolored from blood or white blood cells. An ultrasound evaluation can be very helpful.

Treatment for prostatitis is long and not always successful. There is a blood-prostate barrier which locks some antibiotics out. Also, the prostate is slightly more acidic than blood. Both of these problems contribute to the small list of useful antibiotics. A culture is a good idea for prostatitis. In addition, antibiotics may need to be given for two to three months. Castration is recommended or at least consider medical therapy for the BPH which almost always accompanies this problem.

Cancer of the prostate is very aggressive, tends to metastasize rapidly and is more common in neutered male dogs than intact dogs. Clinical signs may include a painful back, problems urinating or defecating and abnormal gait. Diagnosis may involve palpation, ultrasound or abnormal cells found in secretions or biopsy. Sadly, prostate cancer is generally fairly advanced by the time it is discovered.

Chemotherapy may provide some increased life with good quality but most therapies do not prolong survival times very much. Many treatments also have some rough side effects. For this reason palliative care is often the route of choice.

Your dog’s prostate is an important part of his anatomy. Be sure that he has a rectal exam to evaluate the prostate at his annual physical. Finding problems early can mean easier and shorter treatments. Also remember that many, if not most, male dogs go through life without any prostate problems.